All these years–there have been so many–I’ve been writing book reviews in Goodreads, and then copying and pasting things over here to m’blog, and maybe adding in a little bit more flavor as a sort of prelude. Apparently I think the followers of the blog are in it for something different than the Good People Reading over at Goodreads.

I’ma try it backwards this time. Stream of consciousness book review right here, and then, if the Good Readers are lucky, I’ll paste the whole works over there. Where have my priorities been? 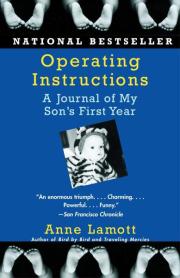 Operating Instructions: A Journal of My Son’s First Year
by Anne Lamott

I love Anne Lamott. I do.

I know that I may have griped a little about her absolute dogmatism regarding all of our broken childhoods, but my gripe was couched in love, and besides, maybe she’s right. Who knows. I still don’t feel like I was left scarred and bleeding, but I might just be the minority. It’s a rotten world out there, folks, and the demons are lurking.

Anyhoo, this is one of hers I’ve checked out at least nine times, generally in my manic if-the-library-were-a-bank-I’d-be-pulling-a-bank-run library runs, where the living room is left trying to figure out what to do with the sixteen stacks of books that arrived on scene and the family is left sidestepping in the aisles of a book hoarder. The thing about those guilt-free library binges is that all those beloved books will never get read before they have to go back to their true homes. I try to convince them that they have enough of their friends here that this could be their new home, but the overdue notices always come, and I always relinquish them back to their rightful owners before the fines reach double digits.

Thank God for books that just keep coming back around until I finally pick them up.

I’ve been entrenched in a lot of politically incorrect ‘Christian’ reading these days. Snarky women, generally, writing about that sticky place where the hot rubber merges messily with the hotter asphalt, and we’re left squarely in uncomfortable, yet oh-so-real territory. Honest writers who aren’t willing to tow the company line and present the shiny-happy, nor the ignorant and blissfully irritating. Fine folks wielding laptops and dirty, grimy, desperate faiths, with editors who long-ago threw away the cans of whitewash, and decided to just let them write.

It’s good, this rough-hewn faith and straight-up writing. It reaches in where not a lot of writing can get. Breaks down the crap images we have of God and humanity. Helps us to open ourselves a little bit to both. Anne Lamott’s pretty much got it down.

Operating Instructions is a raw and real journal of the first year with her first child. She was a single mom and recovering addict, fighting against depression and insanity while clawing at life and struggling to be a good mom. We might not all be recovering addicts, or single moms, but some of the crazy in these pages is universal. Some of it is so out there it makes you feel good about your own nutso–cuz she goes a little farther off the deep end than most–but a good deal of it will strike a chord with any honest human who’s had a baby and then attempted to raise said baby into a full-sized human. This is a rough job, folks.

Still, I haven’t tried any of Anne Lamott’s fiction. I hear it’s damn hard stuff. Knowing her inability to pull a punch, I imagine what I hear is probably true. And I just don’t need hard most of the time. It’s too… hard. Life in the here and now is good enough for me, when it comes to hard; I don’t need to import.

But this must be #5 or 6 of her never-ending NF hit-list, and she never disappoints. She gets a little grungier than I would choose, but that’s who she is, and you can’t fault her for perilous honesty.

Anyway, I’ve been wanting to read the one about the kid for a long time, and I finally did.

And it was good.

Next up: Some Assembly Required: A Journal of My Son’s First Son

2 thoughts on “Book Review: Operating Instructions: A Journal of My Son’s First Year”