We are sacked in, once again, with frigid temperatures in Wisconsin. I wish to be that hearty soul that walks to their evening meeting, even when the mercury is dropping well below zero. I wish to be the one who gets myself out there despite the cold, just for the sheer joy of being out there. But in reality, I am more fragile than all that. In reality, I am perfectly happy to steam by the fire and dream of being out there.

I do force myself out. Really, I do. But I am lazier than I would like, and the skin of my face has become less and less tolerant of the fierce winds and precipitation with age. I can cover everything else up, but some measure of face must be free if I am to enjoy anything, including an upright position. And there is just not much you can do when you lose feeling in your nose after a few exposed moments. My winter walks are much brisker than their summer counterparts, in an effort to work up some body heat, but also to get back to the warmth of my fire quicker, before I lose any appendages. 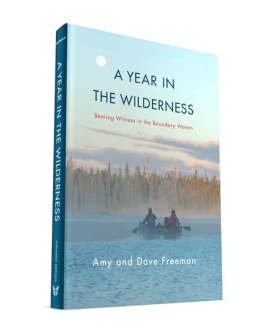 I was reminded once again that I am not of the winter heartiness ilk that I aspire to when we watched the trailer for Dave and Amy Freeman’s Bear Witness: A Year in the Wilderness, the story of their journey through the Boundary Waters. I followed what I could while they were there, so the footage was not new, but a timely reminder of my posh and pampered lifestyle. As I watched them both run from tent to the middle of a frozen lake for their monthly baths, I knew I’d become too soft. I might have to start hardening off the old nose.

We’re headed into Minneapolis in a couple of weeks to view the full screening at Midwest Mountaineering, and to meet Dave and Amy and hear their story firsthand. I’m a little excited. 8)

In the meantime I’m busy settling into 2017 and all that it brings. Four days in, and already I’m feeling behind.

Another round of procrastination, anyone?

Warmth to you,
KJ