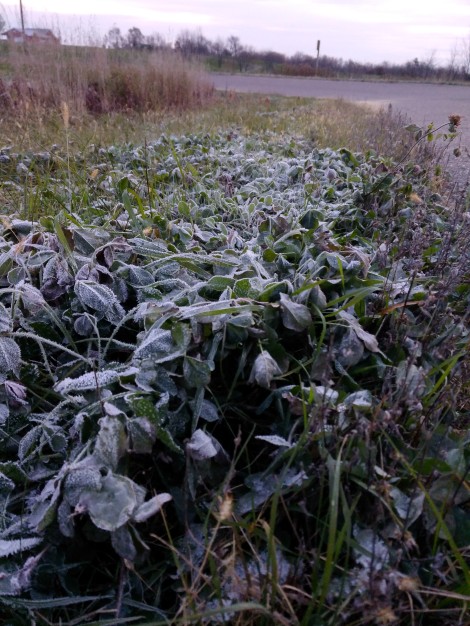 A heavy sheet of frost cloaked the ditch clover this morning. You could almost see those little alfalfa cells bursting at the strain, transforming from lusty stalks to creamed spinach beneath the blanket of white.

Look past the beauty of the lace and arctic destruction, though, and one sees something more. The clover—the whole populace of the roadside clover tribe—had inexplicably somersaulted and presented their collective bottoms to the settling frost.

Now I’m sure there’s a logical explanation. A scientific defense, taking in the effects of the freeze-thaw cycle on genus Trifolium in general, and the local Colfax variety in specific. Considering well the climatic changes in the 2017 autumnal prevailing winds and hilltop swirl. No doubt our temporal proximity to the midpoint between the equinox and the solstice is at play here in some mysterious way.

Science and speculation aside, what I see is tired ditchweed, belly-up and surrendering to the relentless assaults of a coming winter. The plumes of green can only stand so long.

When did it happen? I’m sure I missed it, unless last night held the very convention in which the cluff voted to throw up the white flag. How long have I been striding by the carnage, oblivious?

It doesn’t matter. I am honored to bear witness to the falling of a thousand botanical footsoldiers, blessed to take note of their drifting off for the long winter’s nap. Thrilled at the thought of the coming snows that will insulate these sweet clover until spring and comfort Wisconsin through her own winter’s stillness.

Yardwork beckons. The race is on.
KJ

One thought on “Giving up the ghost”