I am enjoying a mediocre Chicken Marsala on the lowest deck of Jake’s Supper Club when my attention is stolen from my companions by a puttering Murray lawn tractor. Across the river, an older gentleman, clad in 1980’s swim trunks and a matching yellow life jacket, both faded and stretched well beyond their intended usage, is astride the mower, cranking her around hard to maneuver his boat trailer into position at the landing.

What we have here is a healthy dosage of cabin-dwelling Wisconsin retirement, sprinkled liberally with equal measures of redneck and the relaxation due one who spent his life sweating and toiling for The Man. This, of course, is all conjecture, as his threadbare life jacket—while indeed sharpied with worn and otherwise illegible large block letters—does not advertise his history or intention. If it does, I am too far away to make out the details. But the neighborhood and the lawn mower tell the tale well enough for me.

“Well, there’s one I haven’t seen before.” I’m more slack-jawed than I wish to be.

I have interrupted our friend Jeff mid-sentence, and I am chagrined to say that I have no idea what sentence he was in the middle of. You just don’t ignore a Murray, or a Craftsman, or even a Poulan for that matter, backing a full-sized boat trailer into the water. Somehow a John Deere wouldn’t have been so surprising, or even a smaller trailer. But this was more of your circa 1982 square box, no frills mower, mowing deck still proudly attached, ready clear cut your lawn or haul any load. Headed for the water. This is a conversation-stopper.

Jeff is our mortgage guy, our financial guy, and an all around good guy who has traveled across the state this evening to fill out a bit of paperwork on some annuities. That sentence is one of the more high-falootin’ I’ve been blessed to write, given the general woeful state of our checkbook, and Jeff is probably one of the reasons I’m able to write it. We’ve talked him into letting us take him out to dinner to thank him for all the help he’s given us over the years. His eleven-year-old son, Bryce, has tagged along for the adventure, and contributes more to the conversation than Scott and I combined at times. I gather that this is not the first time Bryce has accompanied Dad on business. He seems pretty ‘in his element.’

Jeff has been here before. Through a complicated history involving a mentor, some in-laws, and mostly, it seems, a good deal of golf (possibly this is the sentence that was interrupted; the details are a bit murky), Jeff has frequented our very own Whitetail Golf Course, and has a penchant for Jake’s signature Prime Bites, tiny little hunks of battered and deep-fried prime rib. It wasn’t hard to convince him to come out to eat with us.

Tonight, the weather couldn’t be finer, and we are dining on the bottom deck, closest to the water, bathed in the last vestiges of sunlight breaking through the palms and pines. It’s a confused atmosphere. We have been blessed with only non-smoking neighbors, ratcheting up the enjoyment factor, but the service is a bit haphazard. It all evens out, I suppose.

Jeff has done a number of mortgages and refinances for Scott and me in the decade that we’ve been together, but this is the first time we’ve been able to work with him on the retirement end of things. We’ve talked about retirement ideas before, but the conversations were always cut down in the prime of their youth when we remembered that we had no actual money to contribute to any such plan.

A few months ago, we received in the mail an unassuming (and unidentified) postcard inviting us to a private dinner at this very supper club, where we would be properly fed and beveraged in exchange for an hour or so of our time spent listening to someone’s spiel about old age. Wills and trusts and annuities and such. Old people things like that. Made us both feel a little tired, but the fact remained that ‘Will’ has been on our long-term to-do list for the entire tenure of our marriage, and maturity was bound to catch up with us. What the heck? Free foods is free foods, eh?

I have to say the presentations were pretty well-done, and effectively scared the collective crap out of us, but still, we weren’t really in any place to do anything about it. There was an epiphany, however, when Mark, the annuity guy, talked about his neighbor rolling his 401(k) over into an annuity and never looking back. ‘Set for life’ was the implication.

We had no intention of walking away from a company-matched retirement plan and kissing goodbye that free dough, but it just so happened that we had been sitting on a dead and defunked 401(k) for over six months. Scott had saved and saved into this jobby for 13 years, and then last May when his company was swallowed up by Andersen Windows, the existing 401s were kicked to the side, put out to pasture, replaced by the newer, sleeker, younger Andersen versions. So there sat a modest hump of money that was in need of a new home. Hmm… something to consider. Still, the thought of giving our money to the guy that lured us into his sales pitch by offering us free food through the mail, just wasn’t tripping any triggers.

We (read: I) took copious notes, detailing all the evils of the stock market, studying the pre-tax vs. post-tax dollar debate, and logging the wit and wisdom of two guys I had no reason to trust beyond my Chicken Marsala (yes, I had the chicken that night as well, and, for the record, it was much tastier when it was free). At the end of the evening, as our hosts were railing everyone present into unwanted home visits, somehow we made the schedule, despite our previous agreement that we would do no such thing. Shaking our heads, we exited the dark supper club, feeling simultaneously enlightened, terrified, and slightly taken.

It was on the way home that bells and whistles began their cacophany in my mind. Annuities. I’d had this conversation before. Where? Why would I have been even thinking about something so ethereal and impossible as annuities? Ah, Jeffrey!

Years ago, when Jeff branched out from the mortgage business, he got into annuities, and he was pretty darned excited about them. I was too, but I would quickly learn that things like this require actual money to invest. Jeff was in no position to accept children, indentured servitude, or any combination of the two as capital, so my excitement fizzled quickly.

But now… Now we had something to talk about.

We tried to cancel our little soiree with Annuity Guy Mark, but it seemed that the company hadn’t built in any easy—or possible—way to get ahold of them to cancel these ambush appointments. Having no choice beyond closing all of our non-existent curtains and pretending we weren’t home—dinner and all evening entertainment to be held under cover of darkness—we were going to have to meet with the guy.

I held off calling Jeff until after the meeting with Mark; figured we might as well get what we could out of the meeting and then go to Jeff a little more educated. So, we let him come. We let him talk. We refrained from telling him that there was no way he was going to get our business. We sucked him dry of all the information we could, and then we told him we had to think about it. Boy, did our warm Mr. Annuity grow cold fast. He was out the door in minutes.

I first met Jeff about twelve years ago and two hundred miles to the east. It is a bit of a blank spot in my memory. I was in a dark place, and much of my life at that time has faded to gray, but certain details shine through. My lawyer sent me to him, probably more to get my whining butt out of his own office than to help me, but intentions aside, I am grateful for the referral. I was in the midst of filing for a divorce I did not want, meeting with the lawyer one minute and on the phone begging the loser to come home the next. I had been left high and dry, a stay-at-home mom of two young girls, with another on the way, and when I met Jeff, I was still trying to find my feet, new baby in arms and two in tow, all of us unsure how life was going to pan out. What I knew at the time was that their dad was already wracking up more bills and unpaid debt in Iowa, I was going to get hung for it, and I was already about to lose the house, or the car, or quite possibly both. I was in trouble. It was up to the lawyer to take care of the Iowa problem, but it was Jeff that bailed me out. To make a long story short, he worked mortgage miracles, and I walked away with both shelter and transportation intact, and a payment that I could afford. 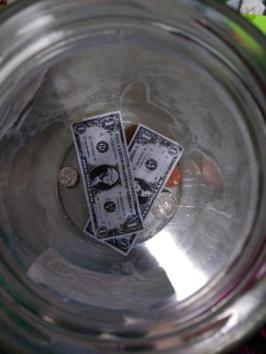 Over the years, we’ve finagled a few more mortgages, and refinanced even more, and the man has given us the shirt off his back. He’s eaten his costs, paid closing costs and fees on our behalf, and I am certain that he lost money on us on more than one occasion. But he’s always been determined to help, no matter the cost. And he’s always worked his tail off to help us navigate the murky mortgage waters safely. I’m one who really needs to understand what’s going on, to get my hands into it, and Jeff has patiently endured and educated me. There was no doubt in my mind from the moment I remembered our long-ago failed annuity conversation, that if we were going to trust our money to anyone, it would be Jeff.

And here we all are now, Jeff nibbling at his Prime Bites, Scott and I just grinning, grateful to have someone to trust. The paperwork is done, and we have finally snagged the opportunity to treat our friend to a quick meal at Jake’s. We hadn’t bargained for the fine evening dining alfresco, nor did we think there would be a show, but it seems the stars were aligned.

We watch our new friend with the Murray lining up his trailer. Back in the day he might not have imagined himself hoisting a jetski out of the water with a lawn mower, onto a trailer that could hold a Bass Tracker, but somewhere along the line, he realized that dreams are fluid, and good ones roll with the punches. Mower or ¾ ton dually, jetski or pontoon, this guy’s living his dreams, taking a break from the rigors of the yard to get his back wheels wet and drive his jetski off into the sunset… rumbling up the bike path and down the road to an unseen cabin that Scott and I can only pine for.