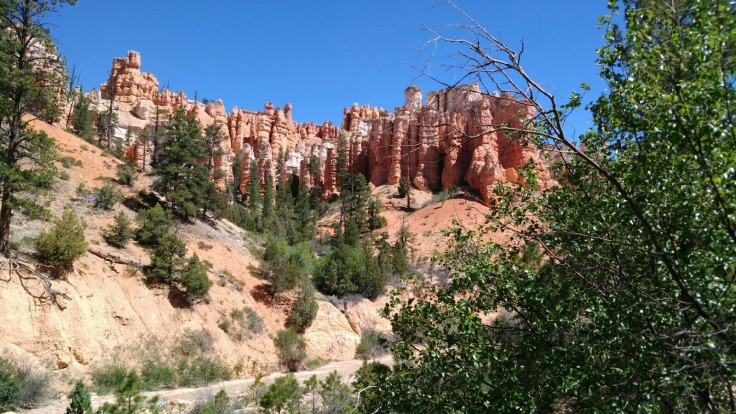 But already I’m ahead of myself…

The Airbnb was great. The beds were passable–let’s be honest, they felt like heaven compared to the string of second-rate Intex–and, and as previously mentioned, the place was clean and cozy.

A win. And after the refund from Utah’s finest state park, pretty modestly priced, to boot.

We couldn’t, however, quite convince ourselves to get up too early, after last night’s adventures, so I set the alarm for 7. We were out the door in Tropic by 8:30 and on our way out to Willis Creek Slot Canyon, via our homemade map. We were only a few miles from the Canyon, but most of it was on rugged dirt roads.

Never fear; we drive a Hulk. We made it in just over thirty minutes.

When we got to the trailhead we joined only two other cars, and it was already heating up. Not Zion heating up, but heating up nonetheless. We started down the trail, wondering where the creek would start to carve its way down into the sandstone.

Not far, it turns out. Just off the path, we found the place where you can still jump across and climb down into the water.

As soon as I spotted it, I did two things:

No… More accurately, I threw my phone into the water. There was definite throwing action; I was attempting to recover a botched de-holstering of the phone from the pocket, and it definitely turned into more of a throw than a drop.

And into the creek it went. Via about six bounces off the canyon walls. I blame the pop-socket and an unnecessarily sticky pocket hem.

I, in all my unflappable glory, stared. Mouth agape. Eyes wide. Heart paused, just for a moment.

I just stood there and watched the waters of Willis Creek roll over my beloved phone. The phone I’ve never even dropped in the grass, or the carpet before, such a good caretaker am I.

Sarah, staring at me briefly, decided upon a more constructive route. She climbed down the sandstone walls and into the pool where my phone awaited rescue, then climbed back out to return it to me. My appearance hadn’t changed a whole lot.

I feel fairly sure that had I been alone when the incident occurred, I would still be standing there.

Miracle of miracles, the phone was still on and working when it was returned to my numb hands. The case sealed most of the water out after proving itself beyond worthy in the shockproof category, and whatever agua made it into the jacks and ports has yet to do any internal damage. Whew.

After chucking hundreds of dollars at certain doom, and cheating phone death, we all, calmly, collectively, climbed down into the creek as it dropped further into the canyon of its own making. 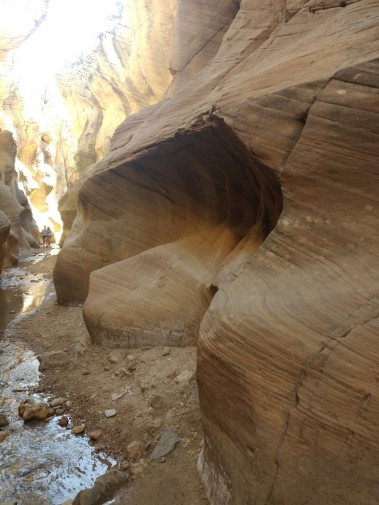 So Willis Creek was phenomenal. We only gave ourselves an hour there so we’d have a chance at seeing Bryce proper, but it was worth every pothole and gravel rumbleyard. It was even worth that part where the van forgot what a monster she was and tried to convince us up was no longer an option.

From Willis Creek we went to Mossy Cave, another of the Costa Vida sanctioned zones of happiness. The cave itself? Yeah, kind of like the Emerald Pools. Methinks that in the middle of the desert the advent of any sort of moss is something of a supernatural wonder. To Wisconsinites, this particular level of mossy is little more than you might find growing on the shady side of your foundation any month of the year.

However, the short hike there was awesome.

Mossy Cave is within the National Park boundaries, just not via the main entrance. There’s just a pull-off parking lot and some pit potties along Highway 12 at the trailhead. Even from the highway, it was pretty, but as we trudged up and over the first rise in the trail, we saw that we were in for a real treat.

The river isn’t really a river at all, but Tropic Ditch, an irrigation ditch dug by the Mormons 130 years ago, to divert water from the Sevier River down into Water Canyon.

I don’t really care what it is; it is gorgeous.

Again, there was that opalescent quality about the water. Almost milky. Indescribable, really.

And the hoodoos! Holy cow! I had no idea what we were walking into! With the exception of the sapphire blue sky and the buttery sunshine, it felt like we might have disapparated onto Tatooine.

You could climb around down by the Tropic Ditch falls, even walk behind and under as they dropped off their dolomite cliff. We wanted to, but crowds were gathering, and you know how we react in that situation. We just kept on a’walkin.’

Sarah, of course, spent some time admiring the clay along the water, pondering how she might bring it home to use on her cob bench.

We just kept on a’walkin.’

While we stayed mostly to the trail on the way up, we returned via the river, and kept our feet wet all the way back to the van.

Mossy Cave proper might have been but a blip on the radar, but we’ll definitely chock another win up for the guy at Costa Vida for this hike. Viva!

And finally we were pulling into Bryce, UT’s National Park shuttle stop, just in time for a quick pre-shuttle lunch. We had ten hours ahead of us on the road to Boulder, but we were so close we could taste it. And after the slots and the rivers and the hoodoos we’d already been showered with, we knew we couldn’t pass up Bryce Canyon itself.

Another one of those places. I’m not even kidding when I tell you that when we disembarked the first shuttle stop along the rim, and approached the fence, I about lost it. That canyon filled my lungs and tears filled my eyes.

I’ve got a slew of pictures, but not one of them captured even the tiniest bit of that place.

Not the color. Not the enormity. Not the brilliance. Not the awe. Not even a little bit.

So we spent some time at the visitor center there, and we got off on all the stops along the amphitheater rim. And every time it was the same. Breathtaking.

And then it was three o’clock and the drive ahead loomed large.

As we drive away from Bryce, I am reminded how very important climate is to my well-being. It was hot there, yes, but the difference from say, Zion, was striking, and I was able to enjoy myself, not just pant and whine.

Also, Bryce and Tropic had clean water. The last week we’d spent at campgrounds with nasty chlorinated water, and we were slowly succumbing to chemical-induced dysentery.

So climate and water. Muy Importante to a happy mama.

We are all fairly sad to be leaving a day early. Had you asked us about this potential sadness yesterday, we would have thought you were crazy. We were ready to be home.

But Bryce Canyon gave us new life, and we’d love to have had one more day there, to hike down in a little, to drive the longer loop and see the rest, and to be there at night, during the ranger-led star walks. I can’t even imagine. Apparently we’ll have to come back to Utah, just for that place.

Our gas tank has been flagging for more miles than I’m comfortable with, and we’re not confident that any of the dots on the map will be able to help us more than the last. For reference, this was all we found at the last one:

Maybe I’ve already talked about Google maps, and our growing inability to read a map in this country. You’ll have to indulge me.

We intentionally venture into the Boundary Waters Canoe Area Wilderness every year, and hand our kids the topographic maps of the area with which to navigate us to our next campsite. We’re doing what we can to contribute to a map-literate youth. They may not have maps when our kids grow up, but dangnabbit, when they find one of those prehistoric relics stuffed in their walls as insulation, they’ll know how to read it.

We have maps with us on this trip. I have been using them where we can. Did you know there are states in the Union that no longer print highway maps? Yes. There are. I shall not name names, but one of them is named after a pretty important president. Navigating by map wasn’t possible in parts of the Pacific Northwest.

And there are quite a few other states that have taken to printing useless glossy artistic representations of their state, and passing them off as highway maps. California would not have been navigable by map, unless you want to stay on one of the four highways represented.

And let’s face it, sometimes Google is easier. Even if it does contribute to mass brain atrophy.

But there is an upside, beyond convenience, to letting Google map our way for us.

This, this road with no actual towns, with no gas stations ever, is not the route I would have chosen for us.

Where Google takes us rarely is.

But thousands of miles down the road, I can see a veritable flip-book of scenes of absolute beauty and splendor that we never would have experienced were I navigating with paper maps alone. Google has expanded our road trip to include more of the local flavor than I ever would have pointed us towards.